BLTG will be having our next meeting at 6pm on Saturday, 12 November at Bricks n Fun.

Entry will be by a Christmas MOC using whatever bricks you choose.

But will bring the train along too though.

It's a non-working weekend for me though which means I'll definitely be along. Hopefully there's as many new faces as the last meet!

I have thoughts on what MOC I want to create, I even created it in LDD, but don't have the pieces for it. I'm going to have to pull apart my town to even get close.

What a great night!

Over 20 people were at Bricks n Fun to show off their Christmas MOCs.

Jeremy's reign as speed building champion came to an abrupt end when he was 'thrashed' by Sean in the final; Sean was rather careless at one stage and 'misplaced' his instruction sheet.

Great fun was had by all though Gary will have to do something about the power supply; it keeps failing.

The standard of MOCs was outstanding; we have some very talented builders in BLTG. The explanation of each MOC was enlightening.

I have enclosed photos of the 3 winners on the night.

I am still in awe at Rudolf the Red Nose Air Ship which was built by Marcus; a brilliant creation.

Hopefully Marcus will post photos of Rudolf on ANZFOL; it is a work of art.

The concept and details are superb. I just love the captain steering Rudolf; it is a very clever use of the globe from the PotC set. Allison's house caused a bit of a stir when Kerry found out that there was a naked Santa in his bathroom on the top floor.

The snow scene is very realistic; a beautiful build. Morgan's Tudor style house was well received with lots of details on display. The attachment on the eaves on the front of the house was unique. A number of people could relate to the minifig who was feeling unwell.

For those who missed it, the house is now on the layout at Bricks n Fun. There were many other wonderful MOCs and hopefully most of these will be on display in the Annerley library in December.

Well done to all who attended last night.

Marcus, your build is awesome. The building and the Rudolph blimp are just brilliant.

The other two MOCs are also excellent.

I finally built a Christmas MOC, the gingerbread house. 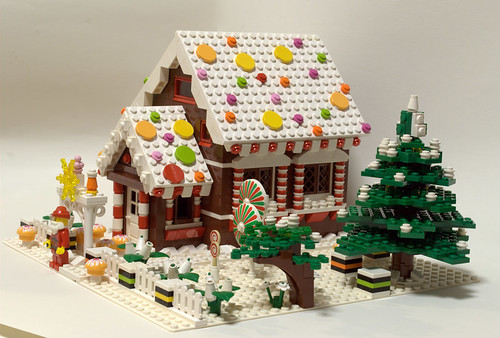 Thanks for your kind words regarding Rudolf the Red Nosed Airship. I have to admit it turned out pretty much as I imagined it and I put alot of effort into it. Overall it took me around 4 days build time distributed over a 4 week period....and came to around 4000 pieces. The nose lights up and there are also lights around the back of the gondola.

I really like your gingerbread house and am interested in exactly how you did the roof as the plates come to such a clean and crisp edge I would really like to know more.

I am intending to be at Bricks'n'fun on Friday and maybe you could bring the house for us to "oooh" and "aaaah" over?

When you see how I did the roof, you will be disappointed, I cheated a little... oops.

I will bring it on Friday.

You will also put me out of my misery' I'm intrigued as to how you did that.

Because someone has an awesomely brilliant husband, there's no more lego cheating :P