Ok so this is a follow on from here. I apologise for the new thread already but I thought it was a pretty big change

And not really in with the title of the old thread. Any mods with issues just let me know.

For those who didn't read - this started as a bits box version of the #4534 train. Fully built from spare parts so there's a few discrepancies but on the whole not a bad job IMO. While I was very happy with what it was... my MOC loving wife egged me on to do something a bit more special with it. Normally I like sets, but being that this was a bitsa anyway I went for it. Spent last night and this morning finishing it off, had to rebuild some parts a few times to get it *just* right - but at last we have the LEGO Christmas Train!

And because being Chrismassy just wasn't quite enough in itself - I've animated/motorised the last carriage too! It's based on an oldschool 9v motor that has the same connections as the 9V train stuff so easy to make it run off the trains power rather than trying to cram in a battery box too. It is noisy though

The last second or so is at full controller speed (i had it plugged direct into 9V speed controller for the video) - it's been geared down so it doesn't all just fly apart at normal train speeds. I'd ideally like it a little slower and not so noisy but I'd have to fully re-work the insides and replace the motor to make it happen and I'm not sure I care *that* much

Let me know what you think.

I love the moving figures in the video.

Thanks for the comments (and on the #4534 train)! I'm aiming to tidy up my track area over the next few days or something and I'll get some video of it on-track too.

Running on a loop

On the loop again... but a bit closer up

Since the arrival of our latest bricklink order I've updated the train to the newer PF "M" motor using the PF-9V extension cables. Result is a much quieter motor and much smoother action, the motor is much torquier so it runs alot better without jamming up. I've also slowed down the movement a little more and reinforced the insides a bit better to help prevent the gears/axles pulling loose under load.

Externally.... pretty much the same. Although.... I do have another motor kit to use somewhere 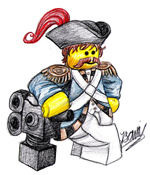 Saw the train running today as we were setting up at Strathpine and it looks great.

Captain Zuloo wrote:Good stuff mattman, how much did your latest modifications set you back? I'd love to see some photos if you had any...

Latest mod wasn't too bad, basically just an M motor (bought a few PF starter kits cheap online) plus the extension that was <$10 off bricklink. Externally it still looks exactly the same, but I'll grab some shots with the top off after the pine rivers show. Can't really price the train since the most of it was just built from stuff we had

The motor + extension were the only parts we've actually bought specifically for it.

The only trouble was the PF motor being a little longer than the old one and pin comes out of the motor a little higher... so had to do a little bit of rearranging. 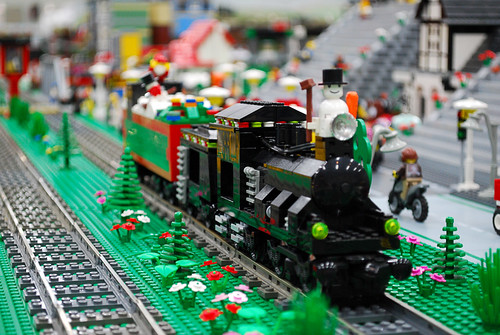 Oh dear... it seems I'm still not done with this :p

I have another animated carriage in the works, bit more complicated than the last but should be more impressive too. I'm also going to incorporate a battery box (or boxes) to drive the motors directly, as I kept having issues with it on the long track on BLTG displays - I think it was just too much load for the 9V tracks.

I'm working on a proof of concept right now, still needs some tweaking and smoothing out but it seems like it should all work :D

Your Christmas train looks great. I really like the moving components in the third carriage.

Hehe well.... here is a sneak peak. My awesome wife found an oldschool technic box with some BIG gears in there - I was able to totally redesign the insides and I'm much happier with how it's running, far less complex and alot smoother.... and I might have some ideas to make it visible when the train is running too

It's just running off a regular battery box now, but that is something else that will be fixed in time - planning to either make a small carriage between the current 3rd carriage and this new one which will either carry a full size battery box or a pair of the 9v battery boxes used in the monorail, one powering each animated carriage. I'm not going to run either carriage off the train motor as it's not reliable enough.

It looks great; it will be very impressive moving around a display.

You will have to bring it to the next BLTG meeting.

A PF rechargeable battery would be great for the sleigh as you can control the speed from the battery box. It might be even more impressive if it was moving a bit slower.
_________________
brickie

Yeah I don't have the big PF rechargeables though sorry - too dear for me to have multiples of them (i'd use a few, like yourself). At the moment it's heavily geared down and that seems to be working well as it's slow but got quite alot of power behind it.

If it's all build and running by then - yes I'll definitely bring the whole train along.

Sigh... 95% of the way there but the mechanism just isn't totally reliable, it's a hard one to build into a 6-wide train.

Totally re-did the gearing - ended up using a worm gearbox which was awesome as it both slows things down alot but also makes a secure 90 degree change.

The movement is still not perfect, but I'm happy for now, next mission is to incorporate a battery box into the train somewhere (likely a small carriage) to power both animated carriages, I don't want this *at all* reliant on track power. I bought a couple of the monorail 9v battery boxes off BL which I just tested and seems fine in theory, though I only have a really cheap battery and it showed slowdown after just a couple of minutes vs eneloop aa's in a power functions box were fine.

If it's possible, I'll throw in some lights... but i don't know if I'm going to be able to with the available space. 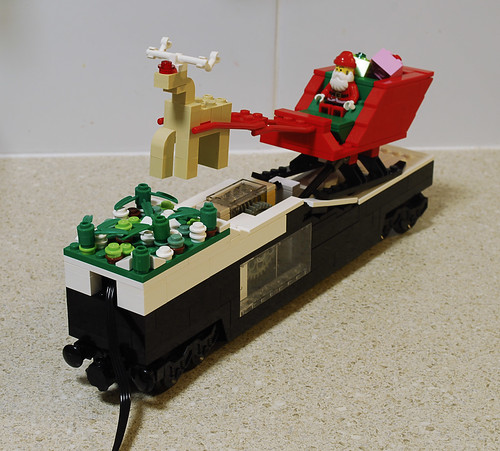 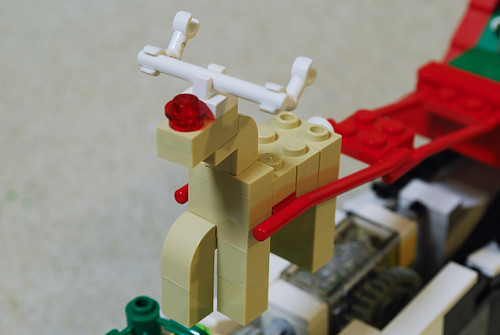 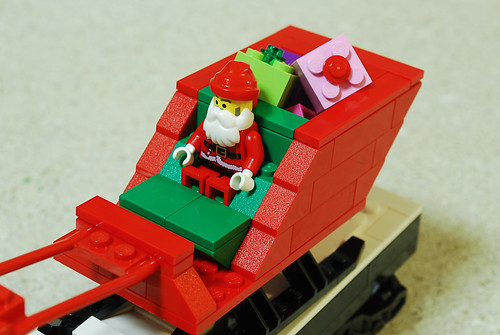 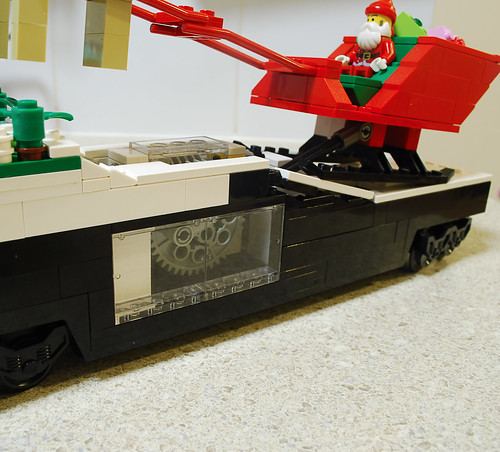 Let me know what you all think!

And now it's complete :D

Completed the power carriage and also decided to put a 2nd 9V train engine up front for some extra grunt - the whole thing is pretty heavy with the motors and battery box. 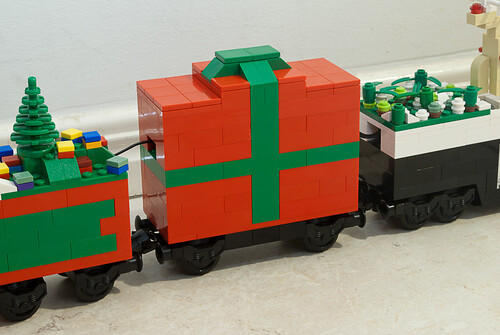 And a terrible blurrycam video, in the hall at night since it's the only place long enough to set it up :D

I love the sleigh and the way in which you have used the gearbox.

Forgot I had a couple more vids... whole thing is running now. Had a couple of issues to resolve since last post but all running now. Frustratingly one of the issues was excess friction in the bobbing santa car which I never picked up on previously - now fixed and alot happier. This probably would have made it run alot nicer on the 9V supply at the shows if i had known before now, but oh well

It's also now powered off a 6xAAA box from the RC train sets and the power supply car has been downsized accordingly.

Awesome! So much too look at!

I wonder what the snowman would look like if he was spinning around as the train moved?

Inspired by Mattman's wonderful creation and urged on by haz, I have come up with a rotating snowman. 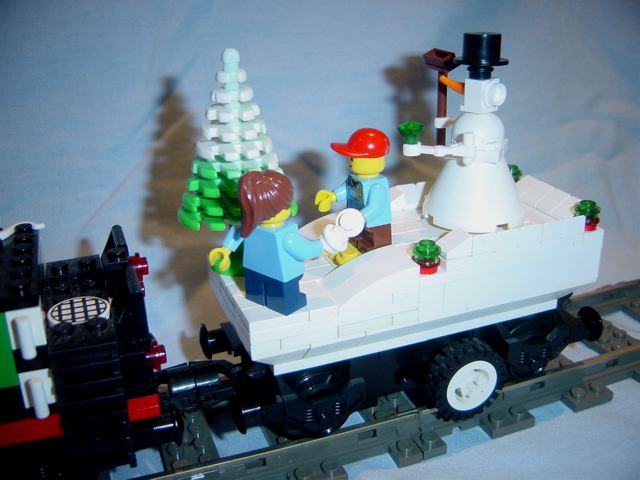 It must be old age, but I can't work out how to place the youtube video into this post.

Looks great and nicely done fitting that into such a neat and small package, reminds of of how I used to rig the lego train set up around the xmas tree

While I'm a bit of a prototypical train nut rather than a Xmas train type, I like the automation of both these trains.

I edited brickie's post to add the video link, brickie you should be able to work out how to use it in the future, but it was a bit involved for me, I copied mattmans link and then substituted your video's id from YouTube. There is probably an easier way using the insert video button, but I don't make videos so have never done it.

Yeah if you go to the preview page, rather than the quick reply box at the bottom of the thread then there's a button that does the movie linking for you