Ok. Am I crazy...
I am thinking of dumping Technic and buying in to the monster fighters theme. Can anybody talk me in to it / out of it?

i think the monster fighters is near dead. is there any new shots of 2014 models? i havent seen any...

i bought the HH a couple of weeks ago, it was a fun build, but i only bought it to part down for town layout/modulars.

I went through a similar phase and went out and bought every set except the train (ironically).

I have mixed feelings about the series. The monster characters are cute; the fighters are somewhat silly. Mostly I like the cars which have a weirdness to them.

Picks of the bunch are the vampire hearse set 9464 and the haunted house, which have a funky Munsters sort of feel.

My least favourite is the vampire castle which for me sets a new low in quality of LEGO design. The construction itself is very flimsy and it is difficult to assemble and keep together, being composed of large panels and tall bricks that rely on 1x2 Technic bricks and pins to keep sections of the building together, modular style.

The series as a whole is quirky, but because it has an active combat theme, has parts and weapons that can easily get lost, and it does take up some room. It is certainly an eclectic mix. I think you'd need to be a ghoul enthusiast to get maximum pleasure from owning these sets. I think they are a great starting point or inspiration for MOC's and mods, or parody aspects in a conventional layout - e.g. depicting a conventional LEGO town as Sunnydale.

It would be quite funny to combine the cars with Scalextric Demolition Derby sets which are said to be compatible with LEGO. 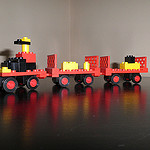 Thanks for the replies.

I have been doing Technic for a long time now (on and off since 1989) and I think I am to the limit of what I can do with it / get out of it. I am never going to be to the level of the people you see building huge RC cars or things with huge levels of detail.

I saw MF as a way to get in to another theme fairly cheaply, buy a few of the HH (One to keep as standard, the rest to MOC) and do something different.

I would LOVE to get back into classic space, but space, ironically, is the issue.

I'm having enough woes designing and building a large modular railway with lots of grade separation which will have to sit on shelves in my little terrace house until it can eventually see the light of day in public.

Time and competition with other projects like house repairs/renovation and work/life balance are my big impediments.

The HH to me is a classic Lego building, reminds me of  houses you would see an  in old black & white horror movie.
With even simple addition's like floor tiles in the rooms and a little graveyard by the side of the HH makes the set look great.
I modded mine so i could take the roof off and the steeple is separate as well & added small details like floor tiles, a graveyard, and a hanging skeleton.

The other sets in the series i didn't much care for.
I thought the Vamp castle was ok but best too buy 2 and moc up a new castle.

The HH & vamp castle go great with the Arkham Asylum and make a great Spooky/Eerie area  to any layout.

Hah. The Haunted House was the last set I had yet to assemble, and thanks to you guys I got the inspiration up to do it with my son yesterday and today. I have to say I'm a convert and probably finally persuaded to do the modular series now, although I had held off for years.

Similar topics
» What New Theme would you like to see.
» Collecting just a sub-theme
» Do you have a all time favorite set? Theme or set build
» new DINO theme
» theme park