BrisBricks will be displaying at the annual Qld Model Train Show on the 4-5th May. This year it will be at Doomben racecourse instead of the sheep pavilion at the EKKA. [This pavilion is now demolished as they build housing units above the Ekka.

Meanwhile, I was at a loss for a while as to what to build for my part of the BrisBricks' display. Then at 3am, the lightbulb moment; build Doomben racecourse and the grandstand in which the show will be held.

With 3 weeks to go, I think that I will make the deadline.

I still have a train station and the stables to build but I am pleased that I now have the horses racing down the straight. 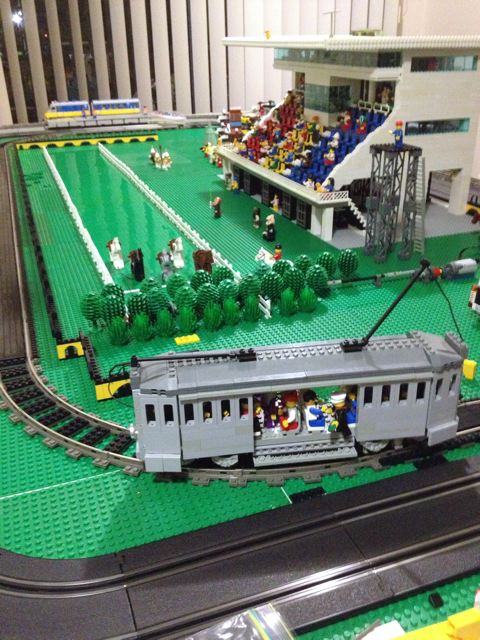 brickie wrote:
Meanwhile, I was at a loss for a while as to what to build for my part of the BrisBricks' display. Then at 3am, the lightbulb moment; build Doomben racecourse and the grandstand in which the show will be held.

THAT is truly amazing! it looks like albion park! way at the back isnt that an old lego train model?

Brickie, I have to agree with Lime on this one - There's just something about this build that I truly love! It's like I haven't seen this kind of example before and it's truly nice.

Those windows and design of the stadium just looks so aesthetically pleasing, the little tower is cute and the great use of remodeled 7710 in the background (yes Lime if your reading that's the train you saw), along with the tram in the foreground.. NICE.

Racetrack itself looks a bit dull though and where's the finish line thingy..?

But yeah that actual stadium is more than brilliant! I love it!

Thank you for the kind feedback.

Yes Lime, that is a train based on one of the old 70s sets. I have made it into a trans continental train with passenger cars and a car transporter.

The grandstand is meant to be a 'small' likeness of the public grandstand at Doomben.

The tower is meant to be the judge's stand. My grandkids helped me work on it today.

You may notice that the judge has the camera in hand in case of a close finish. 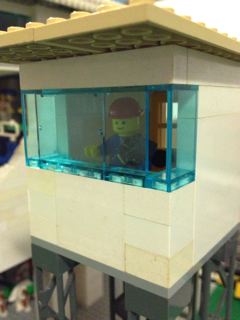 The horses move down the straight to the finish line. There is a random winner for each race.

The trees and bushes are attempting to hide the technic wheels to move the horses. There is still a bit of tweaking to do here.

I was preparing a ladies fashion day at the races in front of the grandstand but somehow all of the ladies [ incliding all the friends ] have been perloined by my granddaughters for their houses they are building. They will be back at school on Monday so I will steal them back.

This is the train that was inspired by push along set 7710. 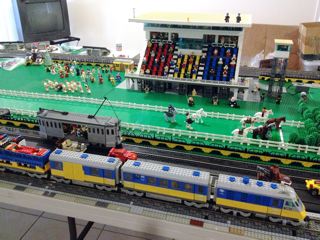 There are another 2 passenger coaches. 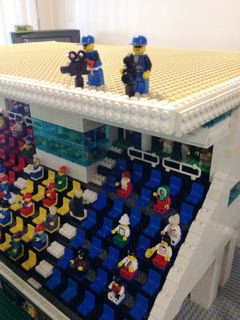 Then like every public event, there is always a common cause of complaint. 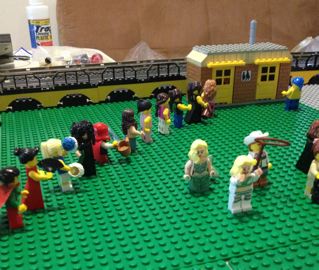 Your grandstand nicely captures the look of the original Brickie and is an unusual subject for a MOC which makes it doubly appealing. So the horses do move and really do race, - that's brilliant and now i understand why there are so many trees at the end of the racecourse.
I love your grey tram by the way, it reminds me of the trams we used to have here in Auckland when i was a kiddie.

The tram is a good replica of the drop-centre trams that were in Brisbane in the 50s and 60s. The tram line went down towards the rececourse. the terminus at Doomben was most unique.

Normally, the two tracks would join together and the single track would go down the middle of the road to the terminus where the crew would change the poles and the driver would move to the other end.

But at Doomben, both tracks were joined with a great circle [like the letter 'P' reversed] so that the trams could keep moving forward. On race days, there were a dozen trams lined up to move the crowd.

Here is a small movie to show the horses; I have sacked the common tater.

Ha ha that's amazing, - your racetrack reminds me of a very old board game a neighbour had when i was kiddie, it had small plastic horses which fitted into lanes on the track and the horses could be made to move by vibrating the track somehow.

Thanks for the information about the trams Brickie. As a kiddie I always much preferred riding on a tram to riding on a bus and I was disappointed when the trams were done away with. Whenever I get a chance to go to the transport museum in Auckland I always ride on the trams and relive the joys of my childhood a little,

I think I will go to the train show in May.

Loved the video, seems to be coming along well Brickie

Progress has been made on the station.

This is a work in progress but the punters now have somewhere to catch a train. 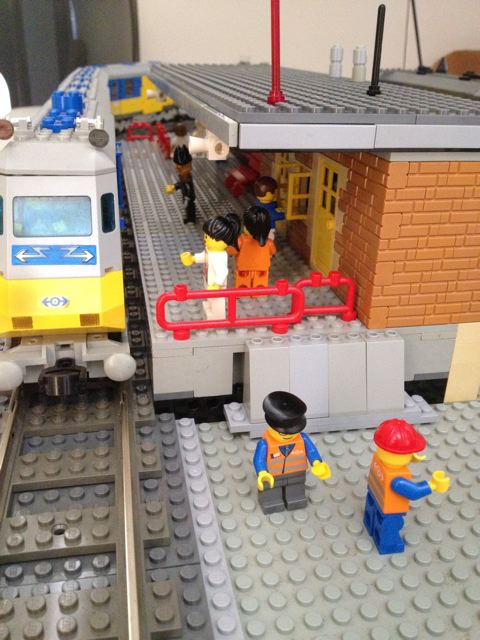 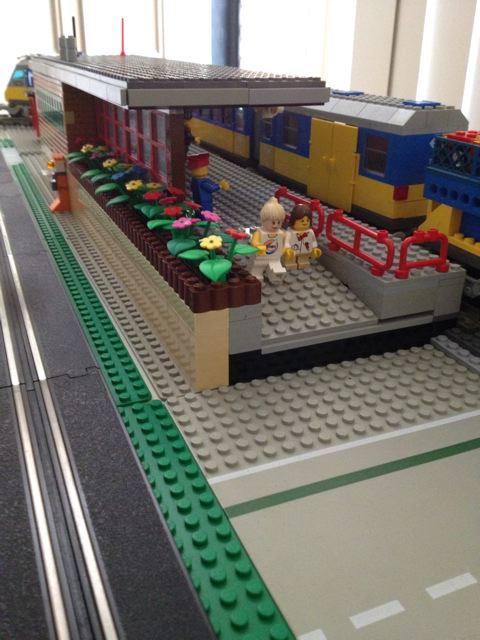 I meant to ask this last night. Where on your section does the station fit in? By that photo it looks like the end is that correct?
Debrick

The station fits on the very end of this display.

Here is an update showing the station at the end of the tables. 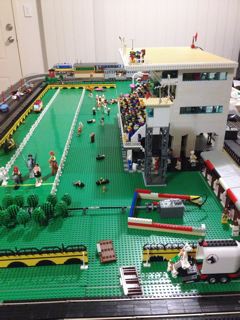 Of course the horses need to be stabled prior to their race. 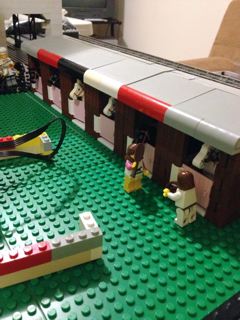 First day of the show; it was great to see the thousands of excited kids both young and old.

The race course turned out better than what I first thought.

I'll post some photos of the rest of the display tomorrow night. 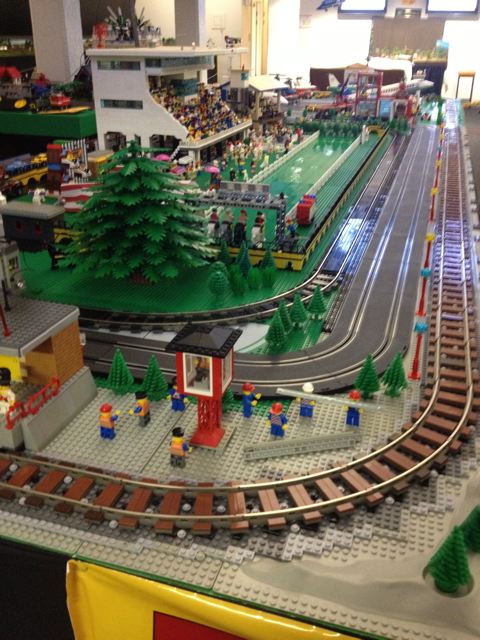 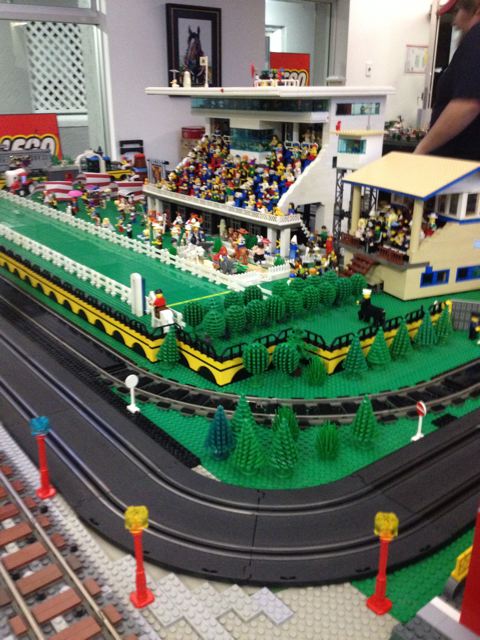 Wait... Is that a dog i see running across the course?

You could be right there, Debrick.

One of the wonderful things about BrisBricks, is the sense of humour of the members.

Nothing is sacred at a train show.

After many hours of running LEGO horse races, I left the race course in capable hands whilst I went to 'powder my nose'.

When I came back to the display, a crowd gathered to watch the next race.

I was lost for words as raucous laughter erupted from my 'friends' behind me.

To add insult to injury, they had placed a rabbit on the track as well.

Over dinner last night, we all had some great laughs about the racecourse 'going to the dogs'.

Sunday was another great day for BrisBricks. The display was very well received by the public.

There was something for every taste in LEGO.

An international airport was busy for the weekend. 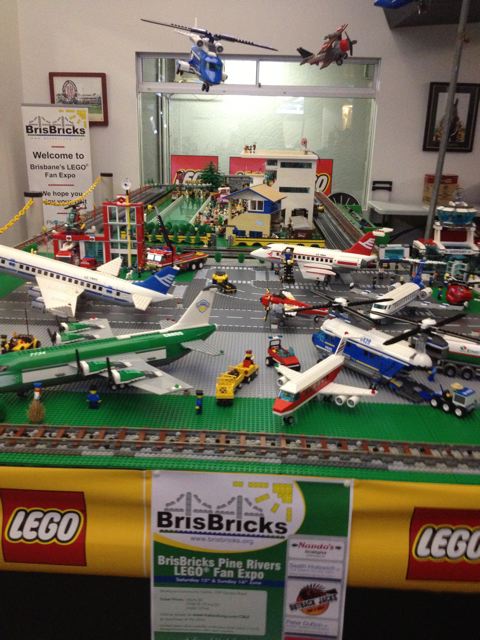 London Bridge was attacked by a rogue dragon 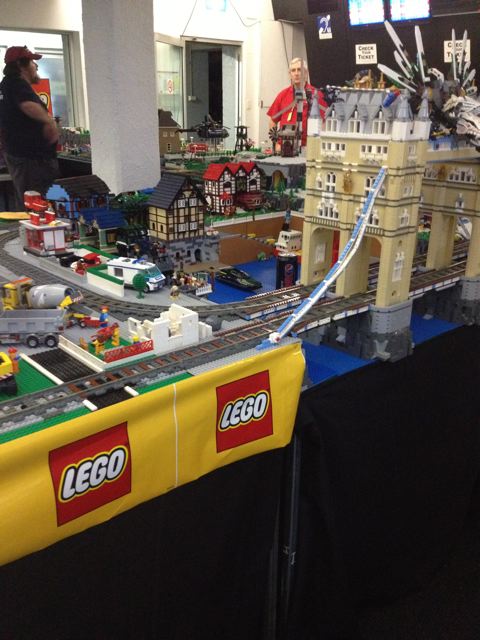 Visitors had a look at a German wintery scene including a jaw shattering ride at the funfare. 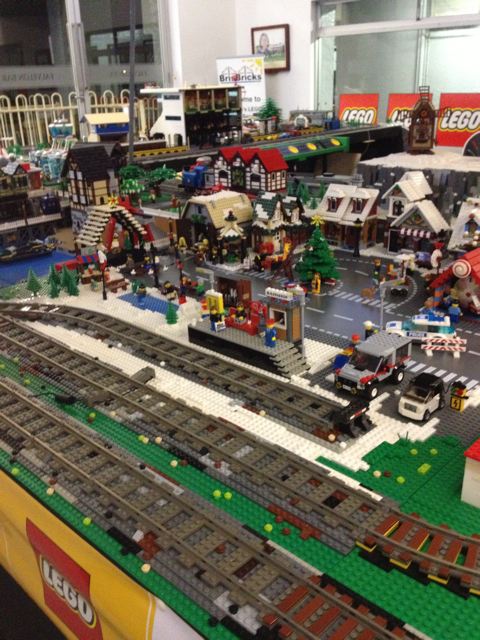 Paradisia' was presented in all its glory. 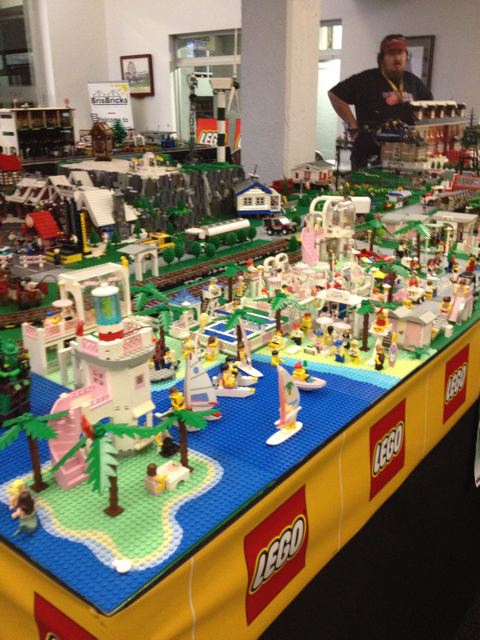 Visitors had a wonderful look at the Australian countryside. 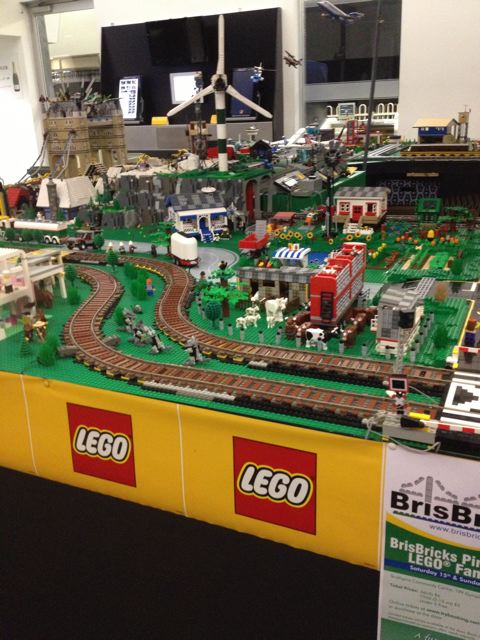 The residents of this English town were out and about the ice rink on this wintery day. 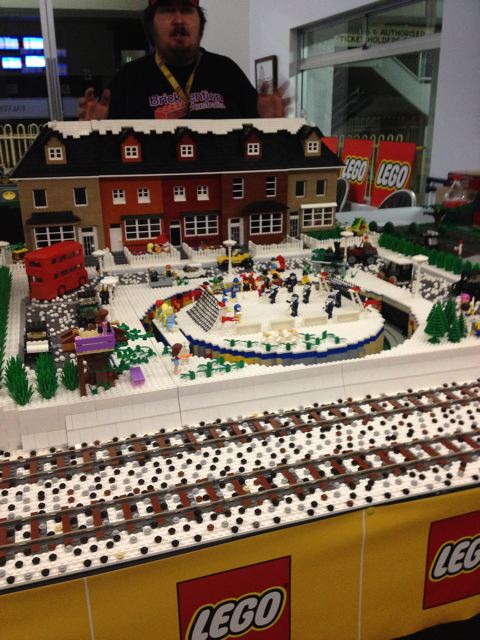 Then the visitors were taken to a tropical paradise to feel the sun and water. 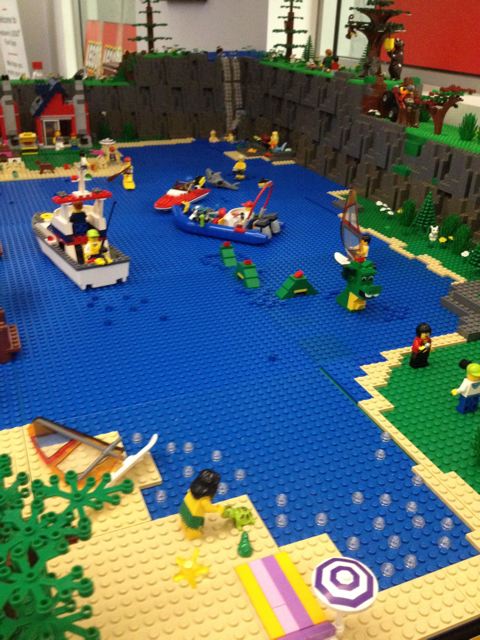 The comments from the public suggested that they thought that the BrisBricks Display was the best one at the Qld model train show.

Thanks for the photos, The display looked really nice, loved the Paradisa area. I wish I could have gone but I was selling salami all weekend.

Just for you Brickie. Race 7 at Doomben as seen live on SKY

The horses will have their next outing at Toowoomba at the start of June.

It looks like I'll have to get a new sign for the starting barrier that says ' Clifford Park'.