Taipan...out of curiosity is that a "Colin's Class" submarine?...or a "Collins" Class?

With all the elements that the mountain man has got, I'm waiting for the the first view of the Colin class sub.

I'm wondering how he is going to sail it down the range.

BTW, Brickton, a small squad of Spartan soldiers are on the prowl guarding my village. Any puny Viking won't have a chance of infiltrating our defences.

As the water tumbles down the hills, the hammer in the blacksmith shop works overtime to churn out more swords for the warriors of the harsh Spartan settlement.
_________________
brickie

Well of course it would only be a "small" squad of Spartan slaves...er I mean soldiers...as thats all you have!!

They will be but a footnote in history once my hoard of vikings comes knocking...but then I suppose it is always important to keep around a few, after all who else would be suitable for boot cleaning.

The viking fortress and township is slowly taking shape, as well as the War Boats to put your settlement to the torch. We are coming for you.

I'd like to see all these creations everyone is making and was thinking of coming to take a look at the BLTG meeting on the 24th. I haven't joined as yet, have been real busy, but would like to, so is a prospective member welcome?

I also have a 5 year old daughter that I would need to bring along if that's ok. She loves LEGO too and that has allowed me to buy plenty for her (an excuse that no-one I know is buying into of couse) Every time we drive past the Bricks n Fun shop she wants to go in to have another look at the display!

Thank you for your interest in the BLTG challenge.

You may have noticed on the BLTG website that we are a group for AFOLs.

The meeting on 24 September will be for members as we are expecting over 20 people there so you can envisage how crowded it will be in the build room at BnF.

Once we lay out our MOCs on tables, there won't be much room available.

Hopefully we will be able to put up photos of the creations for others to view.

Please go to our web site and join up so that you may participate in future 'Lego' events.

Xyver, we look forward to you joining BLTG and joining with us in exploring different uses for our favourite bricks.

I forgot to mention that you are not the only one buying Lego for your youngster.

One of our members frequently drops into BnF to purchase a new set; "For my son."

I just sent in my application. I figured the meeting might be busy which is why I asked. Oh well, maybe next time.

We will look forward to meeting you at some stage.

At our Christmas party last year, a number of kids had a ball playing with Lego whilst the adults got onto the serious business of working out how to play some of the Lego 'games'.

So here's where I'm at with the ski lift. There's a lot more work in terms of detail and styling still to go, but this basic mechanical test shows that it's on the right track.

Yes, aside from the wool rope and minifigs everything is from the supplied kits. There should be capacity to add a PF medium drive motor, but that may be outside the rules...
Below you can see one of twelve triple chairs I've built. They will even have safety bars...

As you can see the line is already forming...

That is brilliant, a really cool idea. (And if I remember, you are doing a big project that it would be perfect for).

Can't wait to see more of the details.

The ski lift is looking great.

The mighty Roman army has some new 'volunteers' to work in their northern sulphur mine. These misguided Vikings are being re-educated by the benevolent soldiers of Rome; they even have a few recruits from Sparta which is just up the road and around the corner. Hi all,
My name is Andy and I have just recently joined the BLTG after visiting Bricks n Fun for the first time.

I must say the talent displayed throughout these pages is amazing I can't wait to meet you all at the club meet.

@Rognys: I like to see that you have all the pieces sorted and in separate containers. The ski lift looks great by the way. And all those snow related minifigs... I'm jealous.

So I only picked up my box of Lego from Gary last saturday and have been working solidly to get a MOC ready for the meeting. I'm glad to say I have finished it and now all I have to do is get it there without too much hassle... He's a bit fragile... (hint: sam witwicke knows him)

Well now that I have given it all away should I post some pics?

My daughter would go nuts if she saw a picture of your MOC, she is a HUGE fan of the 'yellow one'

We look forward to meeting you on Saturday night.

Please put me out of my misery; I have no idea as to whom you are referring when you say, "(hint: sam witwicke knows him)".

A small peep at part of your MOC would make Xyver's daughter and me very happy.

Looking forwards to a photo.

Andy, if you want to post a photo, there is a great tutorial available.

Please remember that the photo must be no bigger than 800x600.

Other ANZFOL members might be able to help you with this.

I am intrigued as to the identity of 'the yellow one'.

Can't wait for some photos of the final creations for Saturday.

The sulphur mine looks cool brickie, love the stream I can see along the edge.

And I also want to see 'the yellow one' Andy... does it change?

Today I built the one that Matt will bring on Saturday, it isn't very interesting though, I have run out of creative energy.

I hope the image works... I just signed up to bricklink...

just a teaser pic... you are definitely seeing more of me than him...

No, he doesn't change.

Here was my final model (for the non bltg members) 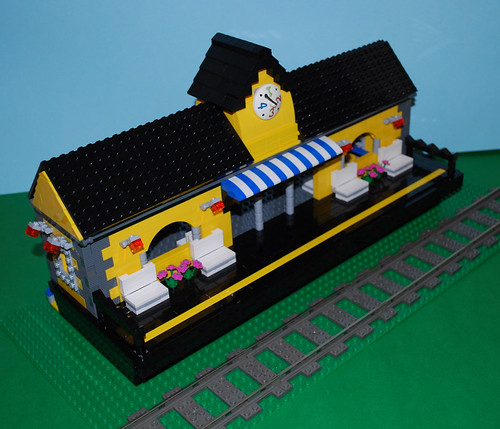 I can't wait to see photos of the other models.

18 members were there with their MOCs. The MOCs were great.

We have a lot of LEGO building talent amongst our group.

Many thanks to Gary and Bricks n Fun for the venue; it was the ideal place for such a celebration of building skills.

The MOCs were laid out on the tables for all to see. Members then spoke about their MOC and what inspired the creation.

Then came the public confession as to how many 'extra' elements were used. 2 members proudly stated that they had only used the elements from the given packets.

Each member was given 3 bricks to use for voting; you weren't allowed to vote for your own MOC.

During dinner, we all went around and allocated our 3 votes.

And the winners were: 'Envelope please". 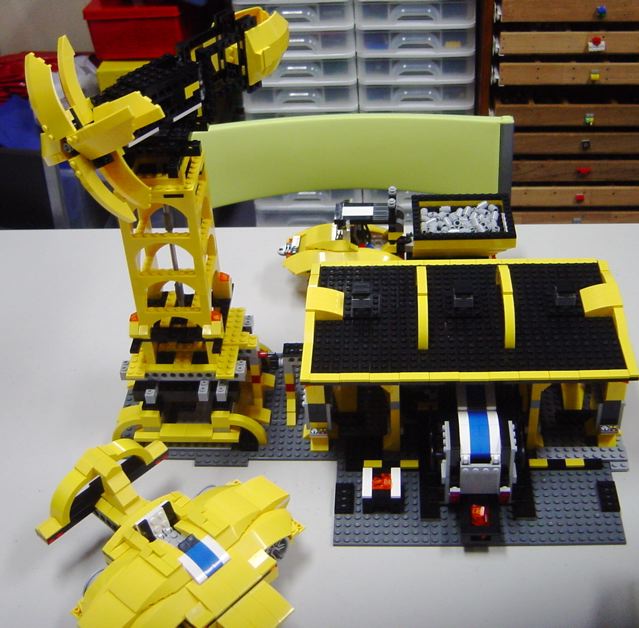 Congratulations to the winners and many thanks to Bricks n Fun for the prizes.

Then we had the speed building competition.

The 1st heat had all the new members take part. Fastest two into the final.

The 2nd heat had the old timers except for Aaron who was banned as he always wins. Fastest two into the final.

The 4 finalist sat down to battle it out; Aaron was added as a wild card in the final.

They were off; some nasty person turned the lights out for a while.

We now have a new champion speed builder; the king was dethroned.

Then it was Lego Talk and plans for the future.

A great night of fun was had by all.

All of the MOCs can be seen @

The big banana is awesome. That would be my favourite from the group, it is really cool and clever.

But lots of really cool builds.

I would like to thank everyone for a great event, especially Gary for being a fantastic host, and basically what turned out to be a "top night".

I was particualrly thrilled with being given 3rd place in the MOC judging. This was one of my first MOC's I have done since a teenager and was nervous about how it would turn out.

For those who are interested in such things the "Industrial Complex (Factory)" took around 10 hours to build and 2200 pieces. I only used the elements in the boxes we were given and in theory turning a wheel on ths side of the factory drove a "crushing" machine as well as the ajoining windmill. The crusher worked perfectly but overall theory and practice turned out to need further development.

I have thought of another yellow build I would like to do...just have to get some more of those boxes...will have to ask around to see who I need to bribe. In the meantime I am very much looking forward to the next team challenge later in the year.