Basically what alcohol do you enjoy drinking.

my top three are

So what are yours?

When I used to drink, Tooheys Extra Dry and Southern Comfort and Coke were my fav brewskies. But ever since I got myself into an embarrassing situation a few years back, I've sworn off drinking.

Its called poison for a reason. I agree on not drinking much, I probably drink once or twice a month. I never drink to the extent of it being a "binge". A beer, or two at a bbq/dinner, A Jaeger when I go out (hardly ever). Then a Bacardi when I feel like one.

The most embarrassing moment I had was kissing my mate on the cheek one Christmas eve, telling him how much I loved him and treasured his friendship

-4: drinks coz of my wife a little bit. At 7% alcohol per volume the Cruiser Blacks are ok value for money and taste just like soft drink.

As for embarassing stories of filth and degradradion while inebriated I have too many.
That said I hardly drink at the moment. On a health buzz. 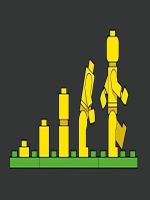 Looks like we are a sad bunch, swearing off the booze like myself. When I did partake in the poison though, it was Bacardi, Malibu (choose your soft drink) and nice beers like TED's or Corona if it has lemon/lime in it.

Wine gives me headaches and allergies to Whites doesn't help much either. Beer makes me bloated so just a couple now and then, but the smooth Bacardi is the winner when out and about.

I wonder if there is a correlation of Lego users and not drinking in excess!

Although when you think about prior EB meetings there was booze abundant, so perhaps not or EB admin is the exception to the rule. :

Maybe they drank in abundance for themselves, they may be all Cadbury's, you know a glass and a half!

I used to drink like a fish, and would like to still but since I suffer from depression, and even a few drinks makes it worse (pretty bad for the next week or so) I pretty much limit myself to drinking once every few months. When I do drink now its mostly European Beers. I particularly like Pilsners, Largers and Lambics.

I really like silver Tequillas, Brandy and Bourbon but will pretty much try anything once.

My most embarassing acts while enebriated; Snogging my sister, telling my girlfriend I wanted to marry another of our friends (in front of both of them), and breaking a salad bowl. Why's the salad bowl so embarassing? Because it was the only thing to break when I fell into the tressle table with all the food on it, and it was the same night as the other two events. There are definite disadvantages to being able to skull a 750ml bottle of Southern and still walk and talk

I think I broke your correlation, though the minimum sample size for any valid statistical test is about 20 and more is always better.

Toohey's Extra Dry Cougar Bourbon for me! I always have some Jack Daniels around but, that's for special occasions.
_________________
"Where's the Ka-Boom!? There's supposed to be an Earth-shattering Ka-Boom!!"
"If I were you, I wouldn't dig into the past. I lived in some of that past, and I got out for a reason." - Homer J Simpson
"My blessing always available, but no guarantee!" - Dalai Lama

My Brickshelf
My BrickSet Collection
My "Would-like-to-have-list"!!
My Flickr

I have so many memorable and embarrassing moments, but I believe the worst one was when I was at my friends house just watching a football match... and suddenly just when our team was about to score... he changed the channel!!!... I saw in front of me a very bright light and notice that all alcohol that I put in my glass was dripping... (I thought the glass had a hole!) but NOT!... I was laying on the floor watching the roof alone and asking my friend, in a very disturbed way, why he changed the channel!
OH NO MY HEAD!!!!

Since then... I still drink, but not in to point of abuse, not good! not healthy and NO NO! very bad idea

With life picking up pace, the Jaeger has been drunk to relax me more. Found mixing with pepsi max better than coke for some reason...

He he, we all seem to be getting 'off the wagon' rather than on. I use to drink a fair bit. Wild Turkey was my choice for a tipple. However i to had an accident involving booze......and lego.

Did you know that the UCS Star Destroyer doesnt bounce....well, in one piece anyway......Alchohol and Lego do NOT mix to good. Mind you, i can laugh now, but i havent even looked in the box for two and a half years now