Don't know you, but looking at what LEGO is coming up with in 2011 it looks like it is going to be an expensive year!!!

I like the look of:
The new SW sets
The new Pharoah's Quests sets
wouldn't mind a few ninjago ones
The new Atlantis sets

and now they announced 8 new sets for PoC!!!! I am

because of how much all of this is going to cost!!!

I agree, Pirates and Pharoah's are now at the top of my Lego list - still city and SW will out number what I buy though.......don't tell my wife !

there is word going around more bigger kits for there AFOL buyers for the 2nd 1/2 2011 but i have not see any news yet about it but i am keep my eyes out over all lego blogs, forums and lego websites.
most times i find this information is true.

Well the rumour is that City Harbour is slated for 2nd half release.....a fishing boat will be interesting to see !

Very keen on the Pirates of the Carribean theme, am picky about SW sets, dislike the Atlantis stuff. Some of the Pharoah's quest sets might be OK.

City harbour would be good, will need it for my layout in about a year

There should be another CC modular building too, post office? Any rumours out there?
_________________
http://www.flickr.com/photos/intrastella/

I think my priority for the new year is to buy some much needed trestle tables so I can build my layout completely as one for once instead of dreaming about it. 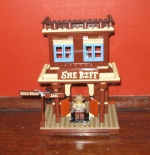 I still have to catch up with 2010 yet, I want a yellow truck and a couple of the Grand Emporium, and the new city house. If I can find one on sale the old police station would be ok.

I'm looking forward to some of the new Atlantis sets for the new column pieces, very few of the police sets, maybe some harbor sets. I want the Diagon Alley exclusive, and whatever new modular appears. I'll buy a box each of S3 & S4 minfigures. I'll probably get some NinjaGo mainly for the figs. I'll wait for images of PotC to see if any of those appeal to me.