This set I have had for a while but have not yet done a review on it here. So to save time I simply cut and pasted my review from the old FBTB site before they changed. I have also added pics as well. For those who have already seen my folder at brickshelf then it won't be anything out of the ordinary.


As I also have the older y-wing I can do a comparison between the 2 but there is not much difference in size or look. The only real difference is the greebling that was put into the new one. Also the missles are sort of redundent without a way of actually getting them to fire. The bomb bay which I think was an afterthought without any real consideration is atrocious. It opens on its own when you swoosh it through the air. Even though you can adjust the technic wheel as sort of a slide bar, it is an eyesore from the rear as you can see the pin and underneath it looks naked because of this. The TIE bomber had the right idea with the rubber bands system and when it was in the closed position it was all flush and it wasn't such an eyesore underneath. The pilot doesn't sit in the cockpit, he floats as there are no studs to stick his legs onto. The head room above him is just all wrong. I have actually had the canopy come off as the click hinges have push against his head and the whole mount has litterally come away. Apart from those slight misgivings the y-wing itself is nice to look at and is caked with detail. Also there are no landing sticks like the old one had. Instead it sits on a 2x3 and 2x2 slope pieces.

By the way thanks to the instructions on this I can now mod the old one so the engines are mounted properly.

detail 10/10 just awesome greebling no need to add more to it
build 10/10 pretty easy and it comes together well
price per parts, 10/10 well for $60.00 AUD you get 437 parts which is more than enough.
engine detail 10/10 I know that normally this is not done but the y-wing is known mostly for the details around the engines and engine mounts and this rendition doesn't dissapoint. plenty of greebles.
Likeness to films. 8/10 because of the missles and the bomb bay which don't do it for me and also the way the pilot sits/canopy problems.

Please excuse the blurryness of some of them Side on with top hatch for the bomb bay open. 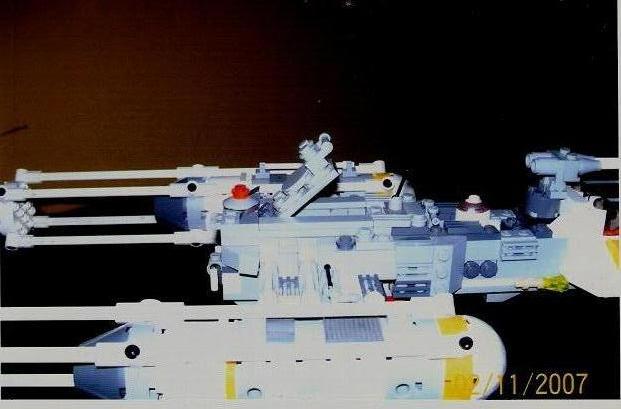 Underside view with bomb bay in the closed position...... 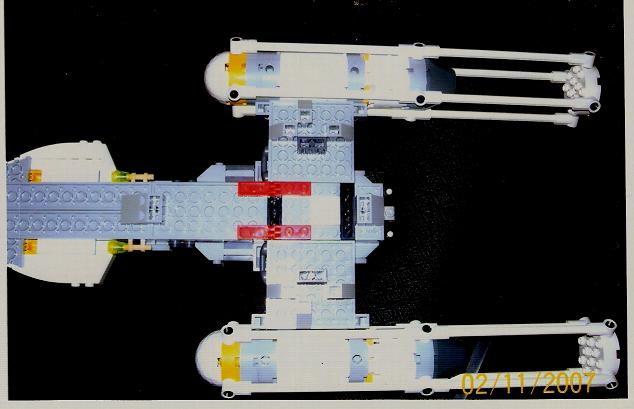 ...and in the open position Also due to the darkness on the back, I did actually get a rubber band system in place so it works just like the tie bomber's bomb bay. The pin moves back and bombs just drop out from the bomb bay. Also sorry about the red underside hinge. I didn't have it any other color.

I always wanted to get this set.....but like all the other '06 sets I never ended up getting! [Im kicking myself for not getting Slave 1

Nice review I might have to get this set on BTTW [Bricks To The World] if they still have it.....

DL the rear section is easy to mod really. I am so surprised that lego didn't finish off the rear when they made it.